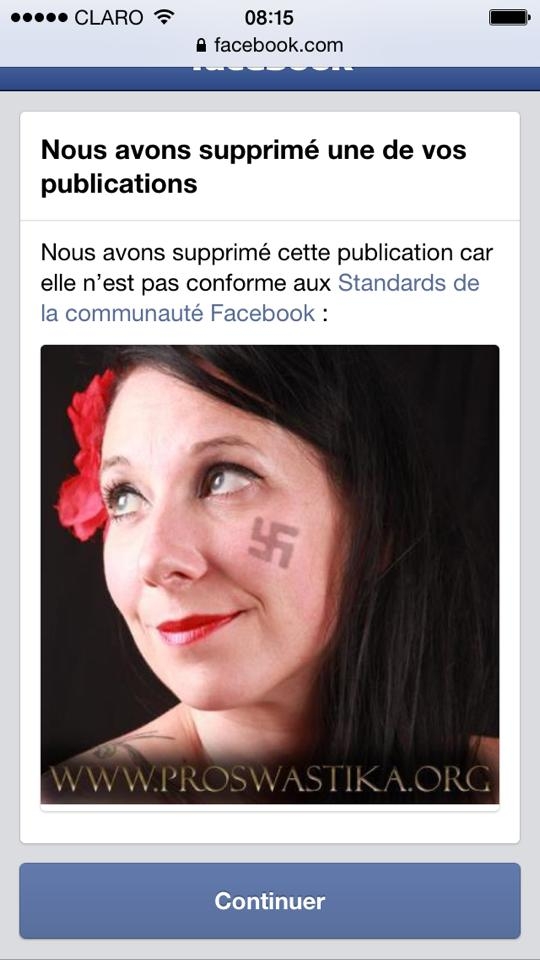 LAS VEGAS, July 14 – In a statement released today by the International Raelian Movement (IRM), Stella Desgagné, IRM national leader for Ecuador, said she was surprised when Facebook put a 3-day block on her account and removed a picture she had posted of herself that featured a swastika facial adornment. Desgagné said she posted the photo to promote “International Swastika Rehabilitation Week,” an annual IRM educational event that seeks to restore the symbol’s ancient, peaceful meaning and remove any association with the Nazi regime that tarred its reputation.

“Facebook censors don’t know the ancient, beautiful meaning of the swastika,” Desgagné said. “In Sanskrit, it means well-being and good luck, and the symbol is cherished by billions worldwide, including Buddhists, Hindus and Jains. For Raelians, it signifies infinity in time. It intertwines with a 6-pointed star to form our Raelian symbol that was given to us by our creators, the Elohim.”

Desgagné said Facebook moderators could have learned these facts at www.proswastika.org, which was cited in her photo caption.

“Facebook allows photos of Buddha statues that depict a swastika on the Buddha’s forehead,” Desgagné explained. “My own photo and those of the Buddha statue are using the symbol in the same peaceful and reverent way. The only difference is that I’m a human being and a statue of the Buddha is not.”

Desgagné said Raelians worldwide will protest Facebook’s action by posting profile pictures of themselves with facial swastikas. They will also demand that the company change its policy concerning swastikas, apologize to Desgagné, and reinstate her profile picture.

“We’re trying to restore the original meaning of this symbol that was hijacked and tainted by the Nazis,” Desgagné said. “Facebook has accepted groups that celebrate the swastika’s ancient meaning, including Rehabilitate the Swastika, Manwoman, Esvásticas en America and others depicting pre-Nazi era meanings. The company needs its staff to distinguish peaceful manifestations of the swastika from violent ones. Education is the key, and Facebook can help by immediately addressing this issue and modifying its policy!”
Tweet