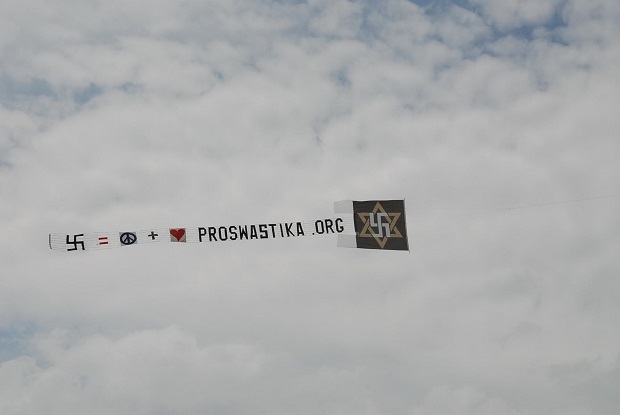 LAS VEGAS, July 10 – On Saturday, July 12, the International Raelian Movement will repeat the culminating event of its annual swastika rehabilitation effort by flying banners featuring the symbol over beaches adjacent to New York City, Miami and other U.S. locations. But in contrast to prior years, this year’s flybys will constitute the grand finale for an entire week of events rather than for the 24-hour period formerly known as Swastika Rehabilitation Day.

“We decided we need an entire week to really get the word out,” said Raelian Guide Thomas Kaenzig. “Swastika Rehabilitation Week began on July 5, and we’ve already held events in about 20 cities in Africa, Australia, Asia, Europe and South America. This weekend we’ll hold events all over North America, including the United States and Canada.”

But Canada’s largest billboard company rejected the group’s order for a large sign it wanted to display in that country, Kaenzig said.

“The company representative said many people would see our ad as offensive and inflammatory, so they wouldn’t post it,” Kaenzig explained. “So this poses a real catch 22. How can the world be reeducated about the truth of this symbol if we can’t get the word out to show people? Luckily, religious freedom is more respected in the United States than in Canada, so we are able to do more here.”

“It’s still readily seen in NYC subway stations and museums, in the old U.S. mint, at the Garfield Monument, and in Native American artwork,” he pointed out.

“There's even a town in upstate New York that was named ‘Swastika’ after gold was found there a century ago. And although most people in the West don’t realize it, the swastika is still a revered symbol for billions of Asians, for whom it signifies good luck and good will.”

He said the Raelian Movement launched an offshoot group, the ProSwastika Alliance, with the goal of uniting all religions that cherish the swastika, and noted that it is cherished by Raelians since it intertwines with a six-pointed star to form the Raelian symbol.