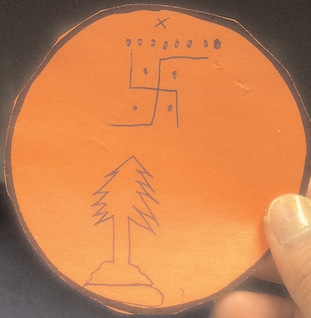 I'm writing you on behalf of the 70,000 members of the International Raelian Movement (www.rael.org) regarding an incident that took place earlier this month at one of your schools where an 8 year old student was forced to undergo counseling for drawing a swastika for a school project.

The swastika is part of the official Raelian symbol that was given to us by our dear creators the Elohim and represents infinity in time. There cannot be a more "sacred" symbol for us Raelians and this is also the case for the billions of Hindus, Buddhists, Jains and members of other religions on this planet. To reprimand a Hindu child for drawing a swastika is highly offensive to all of us and totally unacceptable. It is not the 8 year old who needs counseling but the teacher aid who complained about the symbol, the counselor as well as the principal who approved the counseling. They need to be informed about the beautiful origin of this symbol that can be found throughout the world, on every continent, since the beginnings of humanity and where it has been a symbol of peace, harmony and good luck for thousands of years. We have actually put together a very informative website on the swastika symbol and I really hope that you will pass on this link to your staff: http://www.proswastika.org
As you can see on our website the swastika is widely used even throughout Israel.
Synagogues in various countries are decorated with swastikas like this Jewish synagogue in Verona (Italy).

By associating the swastika with the Nazis, we only give credit to the monstrosities of this horrible regime. Symbols have been abused throughout history and hence the importance of explaining people their true origin.
Imagine the outcry amongst Christians worldwide if an African American teacher aid would take offense in a Christian child's drawing of a cross for a Christmas school project because the teacher aid's ancestors were killed by the Ku Klux Klan.
And I highly doubt that any of your principals would approve racial bias counseling for a Jewish child drawing a star of David for a school Christmas project that would have offended a teacher aid from Palestine whose family was slaughtered by the Israeli army. If such counseling would be approved, all staff involved would probably be dismissed within a few days and you would have to resign too. Such a double standard is unacceptable and we expect at the very least a sincere apology to all those for who the swastika is a highly sacred symbol.